What was the music of the Jewish people like in early times?

Which songs were heard in Mediaeval times among the Jewish communities?

What were the melodies of Hebrew songs of the Golden Age in Spain? 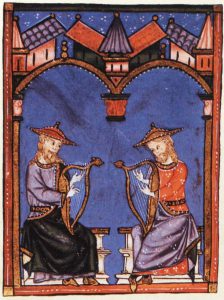 The sounds of silence serve as the background to these questions, as what we know is but the merest whisper of what remains unknown. Except for three liturgical poems (Piyyutim) from Cairo in the 12th century, copied by Obadiah the Proselyte, there is no evidence for Hebrew texts with musical notation before the 16th century.

Reading this and other sources mentioning these prohibitions one can infer that the need to prohibit music inside and outside the walls of the synagogue was the result of the fact that Jews partook in musical activities. Jews studied the “wisdom of music”, others translated manuscripts dealing with music from Arab and European sources, and others studied music at the University from the great masters such as Marchetto da Padova.

The project ‘Mizmor LeDavid – Early Hebrew Music’ poses these questions and wishes to give them new answers by looking at the meeting points between the Jewish culture and the cultures that surrounded it. The journey began with historical research of the musical examples and indications that did survive; a thorough research of the Hebrew texts and poetry assisted by world-class literary scholars, and comes to its realization in the public performance of the songs.

Ayelet Karni, an interdisciplinary musician plays recorders, historical oboes, shawms and other wind instruments. She has a Masters in Music of the Middle Ages and The Renaissance from the Schola Cantorum in Basel, Switzerland, and a Bachelor of Arts from the Jerusalem Academy of Music. She has performed extensively across Europe, the U.S.A and Israel. In her performances she puts an emphasis on presenting the historical context of the works performed and communicating with her audience. Ayelet wrote her Master’s thesis on “The Hebrew Song in Mediaeval Europe”. Her search for Hebrew music from the Middle Ages is the result of her wish to learn about the musical history of the Jewish nation and bring her findings to large audiences. The project ‘Mizmor LeDavid- Early Hebrew Music’ combines research, lectures and musical performances. 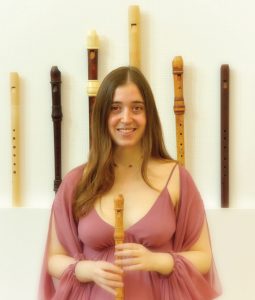